Josh Guter came to NC State from New Bern, North Carolina four years ago. Now, he is graduating with a degree in Science, Technology, Engineering and Mathematics Education with a Graphic Communications focus from the College of Education.

Josh’s college career was nothing less than spectacular. He was a Goodnight Scholar, Entrepreneurship Ambassador and he will now be a Miller Fellow – giving him the opportunity to pursue his venture full-time after graduation. Josh recognizes the impact these extracurricular programs had on his life and reflects on the lasting lessons. 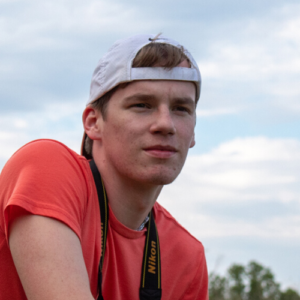 First and foremost, being a Goodnight Scholar allowed him to come to NC State and be a part of so many things. This program gave him opportunities to get connected to professionals, build a community with fellow scholars, get connections for internships and work related to graphic communications and take on leadership roles. Being a Goodnight Scholar also gave Josh non-stop support through his journey to figure out what he was passionate about and launch his own startup.

In the summer after his freshman year, Josh took a self-reflective trip after the loss of a parent and realized he was unsettled in his current life, career and education path. Josh began learning about alternative ways to pursue his passions while staying engaged in active and driven communities. He learned about the Entrepreneurship Ambassador program and applied to be a part of the first cohort. Needless to say, Josh was accepted and has continued to be a part of this program for the last three years.

During his time as an Entrepreneurship Ambassador, Josh got the opportunity to work with an amazing team of dedicated students and staff, through many different forms of engagement such as event management, student outreach, program planning and team management. The ambassador program also allowed him to experience exclusive opportunities to get to know some of Raleigh’s top entrepreneurs, meet mentors, attend informative events and meet founders. While receiving all of these benefits, Josh was also able to spread the excitement he was feeling about entrepreneurship back to students that were just starting their own journeys down similar paths.

After having spent the last four years of his life being constantly engaged in academic and extracurricular activities, graduation made Josh feel as though many of his projects were coming to an end with the exception of his startup, Never Far Away. “Learning that I got into the Miller Fellowship program excited me a ton. Realizing that I would be able to continue participating in many of the activities that empowered me to make an impact at NC State while pursuing my own passion, Never Far Away, gives me an extreme excitement for what is to come in the next 6 months,” shared Josh.

The idea for Josh’s startup, Never Far Away, began during his summers in Duck, North Carolina with his grandmother. As he began to pay more attention to the news, Josh realized that more drownings were occurring at beaches that he frequently visited.

After working with the idea of strapping a balloon to swimmers that they could deploy and finding it to not be successful, Josh realized that IOT based mesh-networking strategies can be used in remote areas to establish connectivity. Never Far Away has a patent pending, working prototypes, proof of concepts and more, but it still did not solve the problem that park rangers and their staff had. They also discovered that their solution was not scalable to larger remote areas.

This setback has not stopped Josh and his team. They have taken a step back and are working with mentors and experienced individuals to take a different approach to launch the start-up. Josh plans to build Never Far Away as much as possible during the next six months as a Miller Fellow while continuing to learn more about his own skills, refine his goals and give back to the community that helped build him over the last four years.

Throughout his time at NC State, Josh has realized that college is about learning how to learn. While he has obtained robust skills in Graphic Communications, the most valuable tool Josh has received from NC State is the ability to challenge himself and learn how to succeed in a variety of different situations.

The entrepreneurship community at NC State offers a lot of events, opportunities and connections to help students learn and grow their entrepreneurial mindsets and skills. Josh recommends that students sign up to be on the Entreprenews mailing list and attend the events that are shared.  He also recommends students in the Graphic Communications program to become an Entrepreneurship Garage member to gain access to the makerspace that has tools that are discussed in class available to use. Overall, with these two recommendations, Josh encourages students to talk with others and become involved in this supportive community.

Josh wanted to add a little bit of advice for current and future students. He says, “do not be afraid to chase what matters to you, your life is yours, use your abilities to make an impact on problems you are passionate about and the rest will work itself out.” Josh is a firm believer that you do not have to launch a business to be an entrepreneur. To him, being an entrepreneur is defined by the lifestyle you choose to live.

Connect with Josh Guter on LinkedIn or through email at josh.guter@neverfaraway.com.